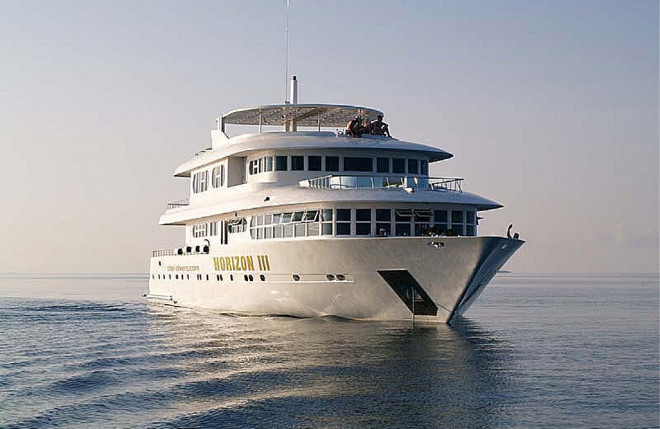 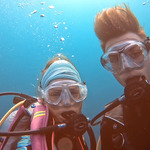 Reisezeitraum: April 2022, bewertet am 23.04.2022, gebucht mit Aqua Active Agency
Gesamt
Kabinen
Essen
Tauchguides
Sicherheit
Tauchspots
This review is concerning a two weeks trip (two consecutive 7-days trips) in April on the Horizon 3. First week was Huvadhoo – Lamu; second week Lamu - Male. To set the context and give the reader the assurance, that we have a certain level of experience with liveaboards: We’re a couple, both instructor level, 800+ dives each, 30+ liveaboard trips out of which half in the Maldives.

First of all: Many guests had quite a few complains and most were able to discuss the points with Amir (hope I captured his name rightly) from the Marketing office, who joined the vessel on the last day. I absolutely appreciate Amir’s effort and courage to face the crowd of flared tempers and listen to their complaints; conversations which should happen earlier with the Cruise Director Zinah, but didn’t happen. Zinah is an absolute incredible dive guide, but I couldn’t see him stepping up and solving the lack of leadership this vessel has. It shouldn’t be unmentioned, after a 1:1 conversation I had with Amir, in which we discussed our own main concerns/disappointments, he offered to waive our bar bill (which was quite an amount of money considering 2 people and a 14-days trip) and a discount on a potential next trip with the Horizon 3 (not sure if we will give it another try, but I appreciate the offer though). Apparently, the Horizon 3 will undergo a major maintenance in June 2022, but until then, some of the issue I’ll describe below will probably remain.

Pluses:
Diving: the dive spots in the South we’re more exciting than in the second week (way more sharks down South) , overall though, we had nice 30+ dives. With 20+ guests onboard it was comfortable to have four dive guides and respectively four different groups. The groups rarely met under water or at least didn’t get in each other’s way, and were well chosen based on experience level. It was a high accuracy when it comes to dropping at the right spot. We dove the two weeks with Zinah as a guide, and his qualities as a guide are undoubted. He chose the depth at the beginning of the dive well (considering we were all on air), to make sure we have enough bottom time when we wanted to hook, we always had 60+ minutes dive time, we either jumped as first but mainly as last group, he had a nice and relaxed speed and was also fine when we occasionally left the group and stayed on our own. Our tanks were always 200+ and the Dhoni was the most spacious Dhonis I have seen so far.
Cabins: We had one of the three upper deck cabins. Those are spacious and have a lot of storage room. The four sunchairs on this deck are exclusively dedicated for these three cabins, which is a nice add on. Rooms were clean (not considering the wear and tear which can’t be solved with cleaning) and were cleaned twice a day. Towels and bed sheets were changed in a reasonable cadence and on the deck were a sufficient number of clothespins (though I always have my own, since we were often on liveaboards were clothespins were a scarce commodity.
Crew: The Dhoni but also the vessel crew were super polite and helpful. It is necessary though to highlight Ranga and Sujesh, who are the stars in the saloon and are operating on a completely different level. Their personality and understanding of serving customers is outstanding.
Vessel: The vessel itself is one of the bigger boats we’ve been on. There is enough room for all 20+ guests. You have roofed seating areas at the stern on the main deck and upper deck, a spacious sun deck and an unroofed seating area at the bow. The main deck has lounge area with racks, so every cabin has a shelf for storage with a socket (not all sockets worked though). Food is provided as a buffet in the salon, but you can eat inside or outside. The food itself was ok, variety dropped at the end of each week. The chef was quite accommodative of all the different requests (spicy/not spicy, vegan/vegetarians and certain allergies).

Deltas:
Nitrox: There was no Nitrox on board. Something broke and the compressor was not able to fill the tanks with Nitrox (timely). The most disappointing thing is that this did happen already two weeks prior us starting the safari and we didn’t get any information upfront (which would have allowed us to rebook to another boat). Our attempt to move at least for the second week to another boat, was foiled by the fact, that Blue Horizon didn’t allow us to cancel the second week without massive penalties. After having the chance talking to Amir at the end of the trip, we got to know that even he only got to know about the broken compressor via complain emails our agency sent them. It is hard to believe that the management wasn’t informed by the boat for two weeks about this issue, but if that’s the case, it just underlines the lack of leadership on the Horizon III. For the sake of completeness, though it is not even worth to mention, on the second day of the safari, the divers were faced with the choice either having two dives/day with Nitrox o 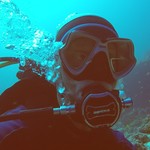 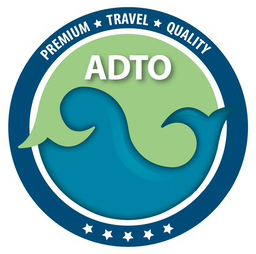